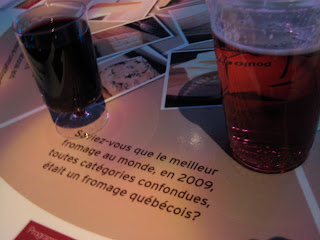 Hearing more French: definitely one of the many benefits of having the Olympics in Vancouver. Last night, I ordered a beer in French at Quebec House. 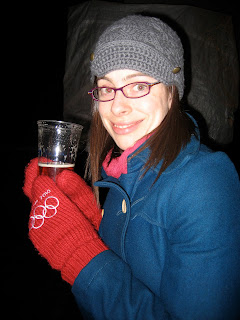 Last week, I went to Men's Snowboard Cross on Cypress Mountain, and the commentary was done by three chill boarders, one of whom was from Quebec. Sometimes it was in English; sometimes it was in French. When the guy from Quebec said something especially funny, one of the others might translate it for the rest of us, but we could understand a lot of what he was saying. ("Le canadien," "rouge," and "premier" being the kinds of basic vocab. necessary.)
O, Canada. Why can't it always be like this?
Posted by Becs at 9:41 AM No comments:

When I was a young, mean teenager, I had a grey hooded sweatshirt that I wouldn't let my sister borrow. Her solution was to, sensibly, buy her own. She was so happy with it, but I was so mad that she would copy my style... obviously grey hooded sweatshirts being the height of originality. 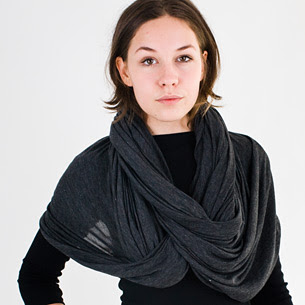 Now, American Apparel's ads occasionally make me shake my head, but this circle scarf is beautiful, practical, and cuts down on weight in your holiday luggage. It can be a scarf, a skirt of any length, a dress with one shoulder or two, etc. In fact, I bought it for my sister for Christmas. The only problem is that now I want my own.
Posted by Becs at 10:18 AM 1 comment:

I went to the dress rehearsal for the Opening Ceremonies of the Olympics last night. While they swore us to secrecy, I can tell you that it was very exciting without being a circus, beautiful without being tacky, and touching without being too sticky sweet or (most of the time) too overly patriotic.
In the meantime, here is an almost profanity-free video to show you the fun side of Canada. For reals.
Posted by Becs at 3:32 PM No comments: 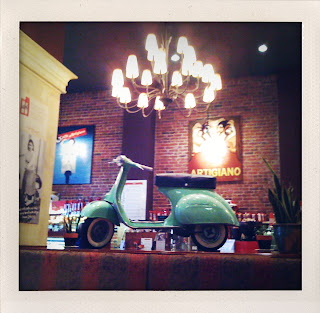 Put a moped in a coffee shop and I will come. Not only does local chain Caffe Artigiano make excellent coffee, the one on West Hastings does a killer breakfast. Picture this: grilled cheese with poached eggs and tomato sauce on top and Italian sausage on the side.
I also love the logo of Ottavio's in nearby Victoria: Drive fast, eat slow.
Posted by Becs at 8:19 AM No comments: