The Hare with Amber Eyes by Edmund de Waal

My favourite book of the year so far! Edmund de Waal traces the history of his unique inheritance: a collection of over 260 netsuke, or small Japanese carvings. 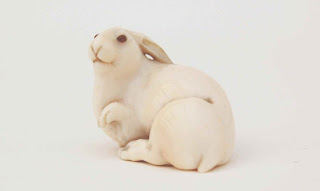 The netsuke travel with various members of the Ephrussi family from a Parisian apartment hung with Impressionist paintings, to Vienna under both the Emperor and Hitler, to post-war England and bombed out Japan.

The book captures much of what is beautiful about the period - clothes, architecture, art, summer houses, optimism - and much of what is ugly -  what it means to lose a war, the racism involved in collecting, and most vividly, crushing anti-Semitism.

It is also a biography of a family, and a honest reflection on the way an author creates a story around a set of events, objects and places.

I escaped to Victoria for the day on Friday, and managed to squeeze in a trip to my favourite book store of all time, Munro's. Housed in a former bank, it is a temple to books. (I snapped this photo with my phone.) 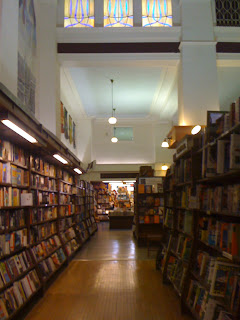 While on the ferry/bus, I managed to read Sarah's Key. I really liked it - the story was gripping, the characters were interesting and the descriptions of the roundup and deportation of Paris' Jews were truly horrifying.

[Just one question: why didn't Sarah tell a) Leon, the little boy from her school, or b) the nurse where her brother was???]

Also,  getting Death Comes to Pemberley for Christmas has also sent me off on a Jane Austen renaissance. (Interesting, but mystery may be a bit, um, clinical for Austen's characters. Elizabeth isn't very funny and Darcy isn't very dreamy.)

So far, I've re-read Pride and Prejudice, Persuasion and Emma, and I'm now reading Jane Austen in Context, edited by Janet Todd. The chapters about dress and food were interesting, but my favourite has been the chapter about money by Edward Copeland.

Copeland calculates that Austen's poorest characters are Miss Bates and her mother, who live on about 100 pounds per year. This is enough for one young, inexperienced servant. The Price family have about 350 pounds per year, and the Dashwood women have 500 (generally thought to be "a thoroughly genteel income of a single woman" but perhaps not quite enough for four).

Mrs. Elton brings Mr. Elton about 500 pound per year; however, Emma would have brought him three times that. Miss Grey brings Willoughby 2500 (hopefully it was worth it).

Who's your favourite Austen hero? Mine has always been Knightley, although in this last re-reading, the bossiness was a bit much. Henry Tilney may be a bit more fun. And then, of course, there's always Mr. Darcy. Swoon.
Posted by Becs at 3:29 PM 1 comment: